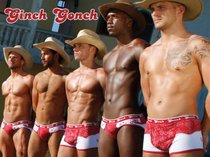 The fashion brand Ginch Gonch was created by Jason Sutherland in 2003 in Vancouver, Canada, as a specialist underwear brand, or “funderwear”, as a “fun protest against boring black and white underwear”.

Jason: “the US and Canadian markets were not as advanced as Europe, and there were no pink briefs, or  boxers with fire truck prints on them. So that is what we made.”[1] 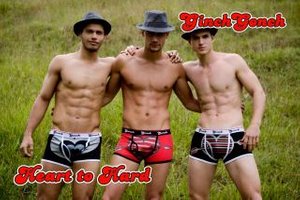 The company's mission statement was “Live Life Like A Kid," a statement that is reflected in everything the Ginch Gonch does, starting with its name, which was taken from the dialects common in Alberta and British Columbia, where “ginch” and “gonch” are used for underwear (usually men's or boys') - the words probably being of Eastern European origin.

From its inception Ginch Gonch has seen the U.S. as its primary market, targeting boutique stores as an underground label, after which they could create relationships with premier department stores like Nordstrom and Bloomingdale's. Ginch Gonch quickly grew into one of the hottest premium underwear brands worldwide.

"According to Freshpair.com, Americans spend more than $12 billion on underwear, of which men spend $3.4 billion and women $8.6 billion," said Sutherland in the early years. "Our men's products are the better line for us at this time, with the Star, Fire trucks and Wiener Eater designs leading the way."

The company has generated an international media stir, and even the fashionistas are taking notice: for example, Stephen Cojocaru, the West Coast style editor of People Magazine, declared Sutherland’s high-end garments a fashion must-have for 2006[2]. 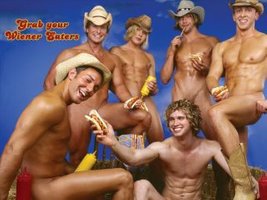 After two years in business, Ginch Gonch was cranking out 20,000 units of underwear  a week. Besides funky, comic-book colour combinations, they feature series names which are at once gleeful and suggestive: Jollycocks, Crotch Rockets and Beaver Eaters (printed with roosters, hotdogs, motorbikes and beavers).

In spite of this apparent success, the company got into dire straits, and in July 2008 New Equity Capital acquired Ginch Gonch and moved its headquarters to Montreal, stating: "Ginch Gonch is an innovative brand with a devoted niche following that we aim to launch to the next level". New Equity Capital believes that the so-called fun-derwear (men's underwear briefs featuring playful designs) industry -- which Ginch Gonch dominates -- is ripe for mainstream appeal.

After the inception of the company, Ginch Gonch was launched via the gay market. According to Marketing & PR Director Rebecca Wilkinson (in line with the company’s “fun” attitude called “Director of Shmoozing & Carousing”, whereas Jason was called “Director of Inches & Stitches”), the gay market is fairly easy to target, with specific gay magazines, websites, TV shows, movies etc. and inexpensive in relation to mass market marketing and promotions. She confirms that they “definitely entered the underwear market through the  gay community”. 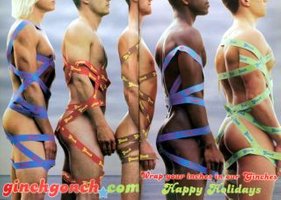 fashion, TV, movies. They have style, use blogs. If you would not market to them, you would miss out on a big opportunity to get publicity. Also, gays are known to be trendsetters, so if they would adopt a brand, they educate others, including straights – who often have no clue what is hip and trendy.”

As to initial choices of media used: founder Jason is gay and was familiar with the different media through which to target the gay consumer. The fact that gays are using internet more than others, for orientation and purchases, also helped. Jason: “the gay consumer is very accepting and loyal, but also quickly put off. The challenge is to keep him interested.”

To reach the target group, many media were used: a PR firm, LGBT print media and websites, sponsoring of private events, participation in Pride and all major social media – to name but a few. 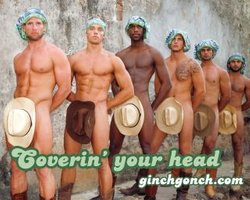 Ginch Gonch made the news for its appearance at a fundraiser for the Cutting Edges, Western Canada’s only gay men’s hockey team. According to Sutherland, it’s gay male clients who are driving an innovative Ginch Gonch marketing scheme which celebrates that childhood torment endured by anyone who’s had a sadistic older brother: the wedgie.

Rebecca: “currently we do not use print media. Our ad buys are solely focused on web for the time being. Past print magazine ad buys have been made in several gay publications and the occasional page in magazines like Details. That being said, it is very difficult to measure the effectiveness of print ad buys in the short term. We see print advertising that is effective on a very large scale over a long period of time (2 years +).”

Try googling Ginch Gonch in images and you will see dozens of pictures of the clearly gay couple promoting the brand. 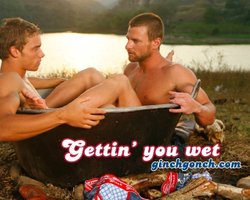 A choice was made to link underwear with sexuality - which always works well with the target market. Preliminary PR focused on gay buyers, creating a buzz with daring ads featuring hunky guys in their birthday suits. Unlike previous underwear ad campaigns by brands such as Calvin Klein, whose models always seemed to communicate that sex makes you cranky, Ginch Gonch's ads are designed to put a smile on your face.

Fashion journalist Guy Babineau reported: they make me want to giggle. I can't help but think of the "Ha-Ha!" kid on The Simpsons. And they make me feel sexy in a naughty-boy way. It would reflect Sutherland’s own creative and

attitude, and evoke the same giddy naughtiness in adults that underwear provokes among kids. 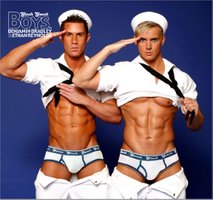 Sutherland’s cheeky humor, savvy marketing and some fortunate timing has helped Ginch Gonch find its way into many drawers – particularly among the gay community. “We own the gay market,” acknowledges Sutherland. “Gay men love them; lesbians love them.”

Out Magazine called it “the year’s hottest underwear.” 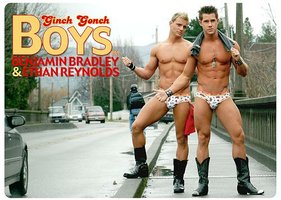 One marketing campaign was an online wedgie contest. In case you’ve repressed your own wedgie memories, or have never experienced this perineum-traumatizing ritual, wedgies are administered by firmly gripping the waistband of an unsuspecting person’s underwear, and wrenching it skyward with as much abruptness and force as can be mustered. A really effective wedgie, supported by high-quality underwear, can actually lift the victim off the ground. For months, the company’s website has featured an online wedgie contest, in which Ginch Gonch wearers submit photos and videos of real wedgies-in-progress.

Sutherland admitted that web-based wedgie contests are “not helping [our marketing efforts] with the straight skateboarder market,” but insisted that gay men aren’t the only ones getting their knickers in a twist. “Women love Ginch Gonch,” he says, whether it’s on them or their men.

So, the first efforts were not only aimed at gay men, but also at straight women - who were then enticed to buy the articles for their partners, sons, friends. It later became clear that also lesbians were interested.

Also: for the first time, matching his & her sets were created, obviously not for the gay market. 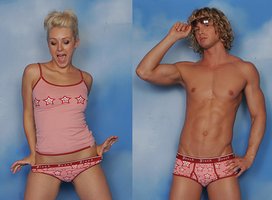 Rebecca Wilkinson in 2010: “We are still trying to overcome this obstacle. It is a challenge to try not to alienate the “straight” male consumer without ignoring our core target market and the people who helped make the brand so popular, i.e. gay men. Our newest strategy is to promote Ginch as a brand for everyone whether black, white, straight, gay or whatever. Our upcoming campaign imagery may feature attractive, scantily clad men but no obvious homosexual scenes. We will continue to participate in LGBT events and support certain causes in the community, but will no longer position ourselves as a specifically “gay” brand.

Our marketing focus has become more mainstream, however, I don’t mean watered down. By mainstream I mean that our cheekiness is targeted at a wider market. We are still the brats of the industry but are appealing to a wider fashion conscious client base. 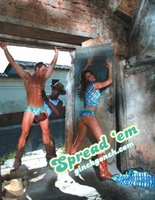 Part of our sales staff is gay and we do consult them when making certain product design and marketing decisions, however no one in a management position is gay. We simply  acknowledge that target as relevant and important and respect their feedback.”

What do you consider your strongest competitors? Rebecca: “although the brands that produce a product most like ours are smaller brands like aussieBum, Pull In, XTG and Diesel, we still consider the big players in the premium categories to be our major competitors. Brands like CK, D&G and Armani Exchange are dominant in the market and we feel that as we slowly change people’s attitudes about seriousness and underwear (we want everyone to have more fun in theirs) then we will be able to capture a larger part of the premium underwear & loungewear market.”

Jason: “these brands are also using sexy models, but in a different way. Their models are often young - not (only) because they target a younger audience, but they also target older men who want to think they are young again.”

When Jason had sold his company and moved on, he went to Colombia, where most of the production was done before. Here he created 4 new brands: 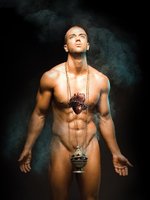 1.      Piss & Vinegar (Dec 2009), a  grown up version of Ginch Gonch, using Jesus and Buddha as icons, linking fashion with faith. The brand is for "people with a zealous, infectious energy, an emotional connection with things and people around them". Two lines that are being planned are “Dirty collection” and “Sex, Drugs and Rock ‘n’ Roll”. Jason calls the link between gay and religion is “interesting”…

2.      Expose: for the confident consumer, who is healthy and comfortable in his skin. Competes with Andrew Christian, 2xist.

Like before, these brands would be launched to and via the gay market, which was now much easier than before, because Jason has the contacts and the experience.

However, by 2014, these labels no longer seem to exist. Ginch Gonch is still around. But the Fun seems to be gone.

This case study is largely based on personal interviews with Jason Sutherland (Colombia) and Rebecca Wilkinson (Canada), February 2010.