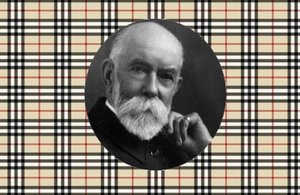 Burberry is a British fashion house, established in 1856 by 21-year old Thomas Burberry. It focuses on the design and production of trench coats, fashion accessories and cosmetics. Thomas invented a fabric called Gabardine, which is completely breathable and waterproof. More than 100 years passed before Burberry trench coats began to be made in more than two different colours: khaki and black. Its check pattern (in use since the 1920s, primarily as a lining in the trench coats) has become one of its most widely copied trademarks. It has been granted the Royal Warrants.

Fun fact 1: their coats were worn in the trenches during the First World War by British soldiers.

Fun fact 2: between 2001 and 2005, Burberry (like Gucci) became associated with "chav" and football hooligan culture. It was attributed to lower priced products, the proliferation of counterfeit goods adopting Burberry's trademark check pattern, and adoption by celebrities prominently identified with "chav" culture. This led the Burberry check garments being banned at some venues.

In February 2018, during London Fashion Week, the brand presented an update to its classic tartan, using rainbow-hued stripes in support of LGBT charities. This line was designed by creative director Christopher Bailey as part of his final Burberry collection. He will leave the company in 2018 to pursue other ventures. He got married in 2012 to his husband, with whom he has two daughters. 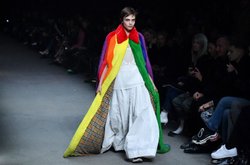 "My final collection here at Burberry is dedicated to — and in support of — some of the best and brightest organizations supporting LGBTQ+ youth around the world," he said in a statement. "There has never been a more important time to say that in our diversity lies our strength and our creativity.”

Supermodel Cara Delevingne made a (rare) appearance in the show. She spoke about her own sexuality as "fluid". Her floor-length rainbow faux fur coat -  retailing at $5,500 - was a showstopper.

United Visual Artists created a prismatic light installation for the Burberry catwalk show. They came up with a design that used 3,000 rainbow-hued lasers to create an "architectural intervention of pure light". The show was set up to represent Bailey's 17-year career at Burberry.

Trade site Business Of Fashion observed: "That he should use this momentous curtain call to celebrate diversity was not just about fashion that blurred gender lines, a collection that could easily be relegated to a ‘fad’. For Bailey, it was a personal and powerful message that went beyond clothes. It was a plea to hold the rainbow with dignity — and a call for companies and individuals to uphold an unwavering commitment to LGBTQ+ rights, as this marginalised community continues its chequered journey across the world."

The launch was broadly supported on social media, and a short video clip was presented titled “Wrapped in Love”. It was created in collaboration with photographer Alasdair McLellan and Condé Nast's them., a "next-gen community platform that covers a range of topics through the lens of today’s LGBT+ community". In the video, a series of young couples lock lips, dance and discuss what it means to be in love, all while wrapped in Burberry’s new rainbow check. The campaign also features a series of portraits of the couples including Nadine and Tia, Alix and Grace and Jack and Thomas, which was also launched via Instagram.

To coincide with the line, Burberry also announced it had made substantial donations to three LGBT charities: the Albert Kennedy Trust, the Trevor Project and the International Lesbian, Gay, Bisexual, Trans and Intersex Association (ILGA). Both the new tartan and the donations were said to be part of the brand's wider commitment to "solidifying the support of LGBTQ+ communities". 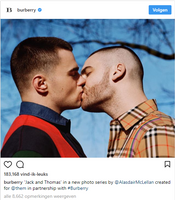 The project was not just a marketing ploy, but Bailey's legacy. There's also evidence that consumers felt similarly. When Burberry took to Instagram to share an Alasdair Mclellan image of two men kissing on Valentine’s Day 2018, it received the most likes of any social media post in the history of the brand: over 180,000. 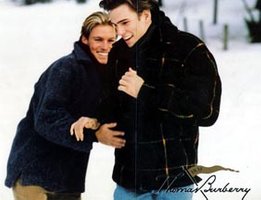 Before this obvious display of LGBT-solidarity, there are only a few traces of their Marketing The Rainbow - in spite of the company being led by an openly gay man for 17 years. One picture, "Snow Play", can be found in the AdRespect archives. It shows a playful duo, but no further reference or campaign can be found.