American Apparel Inc. (AA) is an online-only retailer and former brick-and-mortar stores operator based in Los Angeles. Founded by Canadian businessman Dov Charney in 1989, it was a vertically integrated company that ranked as one of the largest apparel manufacturers and marketers in North America. After losing money for six consecutive years, they filed for Chapter 11 bankruptcy in the U.S. in 2015. The company officially exited bankruptcy and became privately owned. In January 2017, Gildan Activewear purchased AA's intellectual property and other assets for $88 million in a bankruptcy auction after the company filed for bankruptcy a second time in November 2016.

In 2006, in addition to participating in a variety of immigration protests, the company launched an advertising and advocacy campaign called "Legalize LA", relating to immigration reform. After the passing of Prop 8 (which defines marriage in the state as one man and one woman) in California in November 2008, AA launched the Legalize Gay campaign. It was similar to the Legalize LA campaign, and shirts with "Legalize Gay" and "Repeal Prop 8" printed on them in the same style as the shirts of Legalize LA were sold by the company.

In 2009, AA put its "Legalize Gay" t-shirt in storefront windows in Washinton, D.C. When a group of anti-LGBT vandals broke the store's windows, the company didn't back down, but rather agreed to send shirts to any group in D.C. that was fighting for gay rights.

When a student at the University of Wisconsin-Whitewater, was attacked and viciously punched in the face by two men for wearing an American Apparel “Legalize Gay” t-shirt, AA stepped up. They sent 500 of the t-shirts to the UWW campus, and took out a full page ad in the student newspaper, which declared itself an ally to the GLBT community. Some considered it bad taste to turn gay-bashing into a PR-moment, but I think it was well done.

The retailer teamed up with the Human Rights Campaign and the Ally Coalition to launch its 'Make America Gay Again' and 'Make America LGBT Again' campaigns in 2016. The campaigns featured different clothing and accessories with the signature rainbow symbol and messages supporting the LGBT community, but it was the words on one of the retailer's tote bags that got people fuming. According to BuzzFeed, the backlash started when the retailer posted a picture on its Instagram account with the term 'ally' on one of its LGBTQ tote bags.

Late 2013 LGBT campaign groups All Out and Athlete Ally joined forces with American Apparel to produce Principle 6, a clothing line which challenges the anti-gay laws of Russia prior to the 2014 Sochi Winter Olympics. The Principle 6 campaign reflects the sixth principle of the Olympic Charter which states that “sport does not discriminate on grounds of race, religion, politics, gender or otherwise”.

In 2019 Pride Month was celebrated with a limited-edition capsule of five different t-shirts, from cheeky illustrated butts to important slogan messages. The Pride collection’s campaign message is “How We Love,” and it celebrates inclusivity with its white tees. AA donated 100 percent of its net proceeds from the collection to the Los Angeles LGBT Center, more specifically, to the center's Trans-Cosmetic Donation Drive, created by renowned celebrity hairstylist Andrew Fitzsimons.

Like a phoenix rising from the ashes, so did American Apparel rise from the dead after filing Chapter 11 in 2018. On top of that, they announced a new collection just in time for Pride month titled "They O.K." a range of t-shirts and totes emblazoned with the slogans: "They O.K.: All Pronouns Welcome" and "Still here. Still queer." Notice that by using "They," the collection was more inclusive of all gender or non-conforming identities. And speaking of inclusive, the campaign images are just that, featuring stripped-down, natural shots of a diverse gang of models, each of which were chosen from an open casting held for those who identify as LGBTQ+. 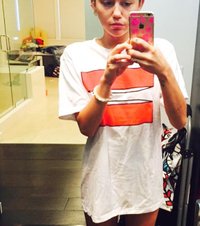 In January, American Apparel co-signed the US Supreme Court brief in the case Obergefell v. Hodges and joined 278 major employers in support of marriage equality.

For Pride Month they joined with the Human Rights Campaign’s (HRC) global initiative celebrating equality and freedom of expression: Equality Forward, making it the group’s first international apparel partner. They sold limited-edition #EqualityForward t-shirts and tank tops that feature a version of HRC’s classic equal symbol, made popular by celebrities such as Miley Cyrus.

Since then they handed out over 50,000 of the shirts at Pride rallies, run protest advertisements nationwide featuring same-sex couples kissing and holding hands, and even partnered with the Human Rights Campaign for their March on Washington.

In September 2014 the brand recruited RuPaul's Drag Race contestants Alaska, Courtney Act, and Willam to be the faces of their new ad campaign. They were the first drag queens to be ad girls for the brand. To promote the new partnership, they released their debut single, "American Apparel Ad Girls", a parody of "Farrah Fawcett Hair" by Capital Cities.

As of mid-2017, AA runs as an online-only retailer and markets itself as "Ethically Made - Sweatshop Free," with the majority of its products being made internationally. Fun fact: in January 2018, the company had an executive board consisting entirely of women.

American Apparel designs, creates and prints its own advertisements. The company is known for its provocative and controversial advertising campaigns. Their print campaigns are widely considered to be some of the best in the industry. The sexually charged advertising has been criticized, but has also been lauded for honesty and lack of airbrushing. The company has also used pornographic actors and glamour models in some of its ads.

For Pride Month 2012 the Gay and Lesbian Alliance Against Defamation (GLAAD) announced that it would be partnering with American Apparel to release a new line of equality tees to celebrate Pride month, with the theme Gay is OK. Fifteen percent of the net sales of the shirts were donated to GLAAD. The Pride 2012 release was the company’s first to feature an openly transgender model, former “America’s Next Top Model” contestant Isis King, in its ad campaign.

In the summer of 2013 they announced their desire for more "transexy" models. In 2013, American Apparel was named one of TheStreet.com's "8 Pro-Gay Companies". They continued their collaboration with GLAAD.

A full 15 percent from proceeds of sales in AA’s 200+ retail locations and sections of its online stores went toward HRC activities, which was also selling the tee on its site. The campaign supported the company’s internal commitment to gender equality and diversity, which includes affordable insurance for all domestic partners of employees. 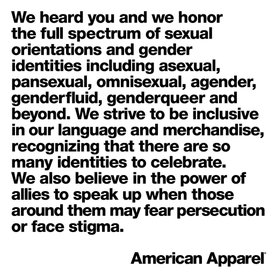 People called the retailer out for swapping out the asexual identity that sometimes represents the "A" in the "LGBTQIA+" spectrum, and replacing it with "ally" in order to emphasize heterosexual people that support the LGBT community. The "A" can also represent "aromantic" and "agender," Fusion reported. As a result, people felt that the company completely disregarded the asexual identity.

I personally have a strong aversion against the crocodile tears about 'feeling excluded' in the acronym, or claiming exclusivity of one letter. Also, I find the Allies to be of the utmost importance to get our message across. So it was a storm in a teacup, that is best forgotten.

In 2017 AA was in dire straits, and not campaigns were run.

The song charted at number 10 on the Billboard Comedy Digital songs chart and was later included on Willam's 2015 studio album Shartistry in Motion.

In addition, their campaigns have often featured celebrities from LGBT culture like viral sensation Brendan Jordan.

In 2010, in response to a perceived lack of full inclusion, transgender activist Asher Kolieboi, who's worked on several LGBT equality projects took matters into his own hands and creating the "Legalize Trans" campaign. Their website is now closed, and the Facebook page has a last entry of early 2019.