In 2010, KLM staff founded the KLM Over the Rainbow network organisation. The board of this organisation is committed to promoting diversity and inclusion within KLM. "As in any large company, KLM consists of a colourful mix of employees from different backgrounds. KLM strives for a culture in which every employee feels valued and safe." Also in this respect KLM was lagging behind most multinational companies and other airlines - in spite of a clear presence of LGBT employees.

KLM Royal Dutch Airlines, founded in 1919, is the oldest operating airline in the world, and has 35,488 employees with a fleet of 110 (excluding subsidiaries) as of 2021. 2003, Air France and KLM agreed to a merger plan in which Air France and KLM became subsidiaries of a holding company called Air France–KLM. They are a member of the SkyTeam alliance.

Unlike their big sisters in the US such as American and United, and even smaller ones like JetBlue, KLM only engage in any Marketing the Rainbow in the '90s once and then remained absent for 15 years. This can mainly be attributed to the Dutch attitiude of allround inclusivity and not making a big deal about minorities. However, I think it was a bad decision to ignore the LGBT demographic, if only to show support, but also because this group has more disposable income and travels much more often than others. 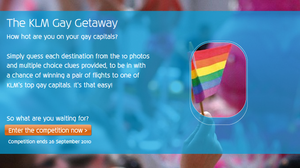 The next thing we saw that was related to KLM's interest in LGBT travellers was an ad for The KLM Gay Getaway about 'gay capitals'. Via a quiz you had to guess which were the ten cities depicted, based on ten photos and some clues, to win a trip to "one of KLM's top gay capitals". The quiz was very easy, so clearly it was mainly about collecting the email addresses of the LGBT travellers to be used for other marketing campaigns. The quiz was spotted by British gay celebrity Stephen Fry.

On the Tips section of their website called Passport, they dedicated a section to "LGBTQ Destinations for Your Next Trip". This was in 2019, in commemoration of 50 Years Stonewall. The list consisted of Barcelona, Amsterdam, London, Prague and Zurich (in that order) and strangely omitted New York.

A blog for the occasion was published too: Journey of Progress: fifty years after Stonewall. 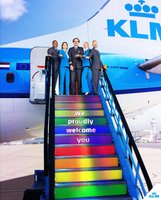 In 2018 they posted a sign of support on their socials for Pride. In the meantime, cute of few gifs were published.

Not much later they dedicated a blog on the occasion of Pride Amsterdam, called Grab Your Rainbow Flag: 5 Fabulous Destinations To Sashay Away To. This list included Sao Paolo, Washington DC, Curacao, Chicago and San Franciso.

In June 2019, KLM hosted the annual Workplace Pride Conference. This non-profit organisation aims to improve the working conditions of LGBT+ employees worldwide. "At KLM, serious steps are being taken in the right direction, for example by making space for initiatives that positively impact the acceptance of LGBTI employees. Together with Air France, we participated in the annual Gay Parade through the streets of Paris."

In 2021 KLM signed Workplace Pride’s Declaration of Amsterdam, committing to developing a working environment where openness and equality are fundamental and where there is an explicit awareness of diversity, inclusion and the LGBT+ community. 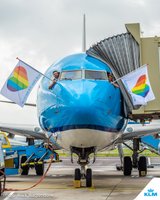 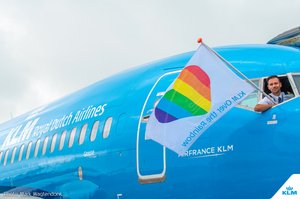 Following in the footsteps of other airlines, KLM sent an all-gay crew to New York to contribute as a company towards celebrating the Stonewall demonstrations.

KLM's LGBT employee platform Over the Rainbow organized the Journey of Progress tour. The tour made its way through the city centre of Amsterdam, and local guide Henk spoke about the origins, development and the current status of the LGBT community in Amsterdam and the Netherlands.

On social media a campaign was run called "Labels are for baggage, not people", which garnered huge engagement.

Around the same time they posted a picture from

@twodadsandagirl: Ready for their vacay ✈️ 🏝 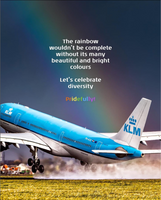 While many of the 2020 physical Pride festivities were cancelled due to the pandemic, KLM stated: "we feel that Pride (and all it stands for) should be celebrated every day! That’s why we’ve (again) partnered with @withlocals, a platform supporting local tour guides to organize a digital travel experience to honour Pride in one of the most important cities of the LGBT+ legacy."

On IG Stories they showed 9 profiles and said: "Everyone should have the freedom to be themselves 🌈. We strive for all our employees to feel safe and included. Check out our stories to read how some of our colleagues experience diversity & inclusion at KLM and what Pride means to them." 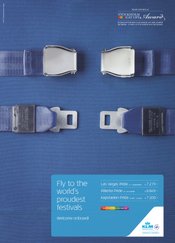 KLM sponsored the Stockholm Gay Life Award in 2013, and wanted to make an ad that profiles KLM as gay friendly and show some of the destinations they fly to that have Pride-festivals during this summer period.

This was actually the first time they used the image of the seatbelts to have a topical visual of their support for same-sex couples. This image led to wide criticism years later. 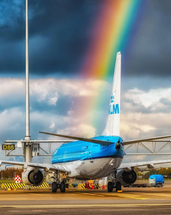 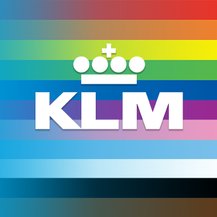 For IDAHOT (International Day Against Homophobia, Biphobia and Transphobia) on May 17 they posted on their socials as well.

For Pride Amsterdam they showed the many colored rainbow behind their logo on social media. 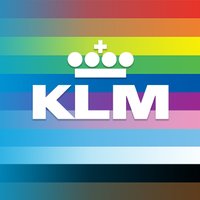 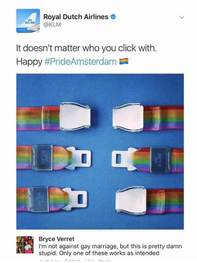 The 2013 visual was expanded and reused in 2017 with the slogan “It doesn’t matter who you click with”. One with two buckles, One with two tongues, and one of one tongue, one buckle. KLM intended this as a cute representation of different relationships. Unfortunately, since only the “straight”pairing actually “works” in the literal sense, Twitter users started dragging the airline right away. Some objected to the implication that queer relationships don’t “work”. Unfortunately, there were also a lot of anti-LGBTQ voices gloating and claiming victory, like: "Fly Royal Dutch Airlines, where your only chance of surviving a crash is buckling up the heterosexual way" and "I love it when #VirtueSignalling advertising #propaganda backfires. Lol. Thanks @klm."

Certainly, KLM didn’t mean to imply that straight relationships are the only ones that “work.” But this shows the importance of choosing metaphors carefully.

For a company that operates in an industry where a higher than average percentage of employees is LGBT, but even when measured along more neutral parameters, KLM has been quite late in Marketing the Rainbow. Their visibility as sponsor of the Gay Games in 1998 was only followed years later with new initiatives - hesitatingly. Only after the watershed SCOTUS moment in 2015 they stepped up their efforts, but still limited to Pride and special days like IDAHOT. There is no consistent media presence, or collaboration with an LGBT charity. They get bonus points for saving the Gay Games, but overall hold a meagre score of 6.5. 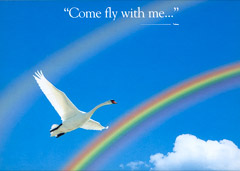 The savior of the Gay Games Amsterdam, 1998

When the Gay Games came to Amsterdam in 1998, they had problems finding sponsors. It was not until KLM committed to be main sponsor – at quite a late stage – when others followed. Their decision to sponsor the Gay Games was based on 3 principles:

1. they smelled business. There would be a lot of additional visitors coming to Amsterdam in a relatively short time, many of whom could fly business class. In fact, a number of additional flights were scheduled from San Francisco, to accommodate the demand.

2. they wanted to reach out to “the gay consumer” and create brand affinity. However, a real strategy was not planned, this was a first attempt.

3. it was a reach-out to the staff, many of whom are gay. The climate for gays in the organization reportedly was already excellent, but this was a sign of corporate support.

KLM did participate actively in the games by attending events, and for instance the CEO “officially” started the marathon.

When the Gay Games ran into big financial trouble just days before the opening, the City of Amsterdam appealed to KLM to help out. They did, with a substantial cash amount on top of the sponsorship contract. This amount was paid directly to the City to cover expenses and outstanding bills.

In light of this negative experience, no further gay marketing activities were scheduled. The Marketing & PR managers did not dare to persuade management once again to commit to the gay market.

It had been an important signal: only after KLM had promised to become the main sponsor (quite late in the process), others followed. Apparently the fear of negative effects hindered companies from committing to the LGBT community. KLM has saved the Gay Games through their efforts as the main sponsor and the additional 'bonus support'. These had a huge economic impact on the Amsterdam region, despite the organization itself going bankrupt. And to be honest: it was the best week of my life with an energy in the city that must have been visible from the month.

However, in 2004 KLM was reported to start a broader “gayvertising” by buying advertising space on the Italian gay portal Gay.it (after some earlier presence on for instance queer.nl and sponsorship of the Amsterdam Gay Games in 1998). The purpose was to attract more Flying Dutchman (now Flying Blue) members. The campaign featured banners, pop-ups and a game, and the chat was sponsored. 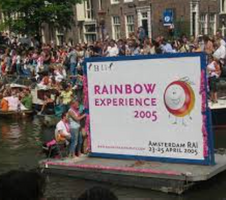 A first attempt at mobile marketing was made during the Rainbow Experience, the gay lifestyle exhibition organized by the RAI in 2005. KLM had created a 'lounge' in collaboration with travel organization ATP. Access was granted via a 'member get member' SMS system (in 2005, long before corona QR codes), visitors were treated to a special theater act, sushi from Okurachefs and an open bar with mainly vodka gravy.

Important learning: KLM had misjudged the 'thirst' of the gay contingent, because they ran out of vodka halfway through the day. A creative purser then fetched a crate (!) of Absolut vodka from somewhere. (NB: I personally witnessed, but deny any involvement)

This commercial from 2010 can be described as "gay vague". A business man in Thailand receives a text message that says "Race you home." The two men get in a race: when the winner gets to the plane entrance, the words "Welcome home" flash onto the screen, alluding that the airplane is considered their home. Or are they (more than business) partners? In AdRespect this ad has been rated equal because the context in which "Race you home" is used may give off the impression that they are racing to the home that they both share as partners.

The business argument was based on the usual myths about gays, the actual results were never quantified - but the extra flights, and a ‘gut feeling’ when checking the passengers on the incoming flights at Schiphol Airport seemed to confirm the expectations.

There were quite a few initiatives in Germany, already in the early '00: this operation is independent from the Dutch one and made an effort to establish KLM as a gay-friendly brand in the market.

One campaign is a play on words based upon German consumer vernacular, where 'clicking' and f*cking are linked: “KLM clicks well”,“The best vacation click of your life” and “A typical man... simply a click and he heads out.”. According to the ad agency, this campaign is intentionally provocative, to grab consumers’ attention and in line with KLM’s well established German gay-friendly brand equity. The ads ran 3x1/3 page in a few magazines, sequentially placed on the right side of the right hand page.