In 1998 we saw the first gay ad in the UK, by Unilever’s Impulse: a young woman walks down the street, drops her shopping and a good-looking young man stops to help her. They flirt a little, hands touching as they pick up an apple. She thought she could be in - but then a second man, who was with the first from the beginning, signaled for the first man to come with him.

For anyone who didn't pick up on the fact that the men are in fact a couple, the ad then flashes to a series of images - two other men in leathers lean together, there's a rainbow flag and a dog wearing a leather outfit, and Quentin Crisp even makes a brief cameo appearance. Apparently she didn't realize she was in the gay Village in New york, the girl suddenly becoming a sort of Dorothy from the Wizard of Oz - everybody laughs.

Remarkably enough, the Lesbian & Gay Foundation considered it controversial and it was later ranked among the Top 10 Most Controversial Gay Advert.

The tagline is 'Men can't help acting on Impulse,' which does seem to imply that it would only take the right body spray to 'turn' a gay guy straight. It could be read that the guy is bisexual and therefore does find the woman attractive, but so much effort is put into reinforcing the fact that this happens in a gay area that the 'joke' just wouldn't pay off if he was bi. That said, it's quite a fun advert, which got a lot of airtime and few complaints. No kiss though. 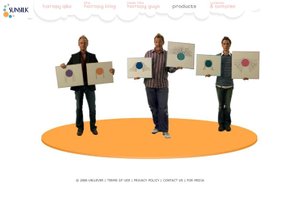 In 2006 Unilever launched a Sunsilk campaign called Hairapy, building on the gay stereotype of fussy hairdressers. The promotion was aimed at women though, tapping into the anxiety that many women feel on a ‘bad hair day’. The resulting "Hairapy" program centered on a Sex and the City-inspired promotion with gay male characters showing up in ads and on the streets to help women get through their various hair traumas. The Hairapy guys offered their version of tough love to women in need of honest feedback about their problem hair, creating a snarky tone that jibed nicely with the personality of the brand.

Unilever is one of the world’s most culturally diverse companies and is committed to developing an inclusive culture which acknowledges the contribution of all employees, regardless of their gender, age, race, disability, sexual orientation or any other background. They have a Global Diversity Board providing the overarching vision, governance and target setting for inclusion and diversity across their business.

In 2019, CEO Alan Jope shared a message of Unilever’s support and belief that every member of the LGBT+ community must be treated fairly by society not just for one moment in the year but every day, every week, every month and every year.

Over the years, they have been actively participating in Marketing the Rainbow: both on corporate level as well as many individual brands. Here is a look at their cosmetics division.

Openly gay comedian Mario Cantone ("Sex and the City") became the voice of Hairapy in TV ads in which he doled out blunt criticism to women with flat or frizzy hair. The campaign generated 240 million impressions and distributed more than 1.15 million gift cards, allowing Sunsilk to exceed its market share goals in the launch's first month. There also was a website with 3 male "hairipists," who were there to save women from their hair problems. AdRespect: "This campaign obviously utilizes the whole female idea of a "gay best friend" who solves all the problems female friends can't. It's your gay best friend to the rescue in these Hairapy commercials!"

Years later, Sunsilk released a beautiful commercial, about a boy who wants to be a girl. The film stars, and was inspired by the true story of 20 year-old Rock Kwanlada, first runner-up Miss Tiffany Universe 2017. It was an instant hit on social media, with 2.5 million organic views in the first 48 hours. Within 2 months, it had sparked a nationwide - and in fact worldwide - conversation around gender and stereotypes, gathering over 37 million views in Thailand alone. #BethatGirl 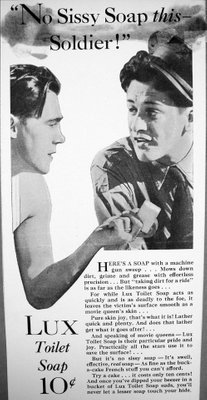 Early print ads, starting late 19th century, have often contained images or text that would now be perceived quite differently. Interestingly, this is often the case with soaps - like Ivory and also Unilever's Lux. This ad from 1944 could be qualified as 'gay vague', if only by the image of the two men - speaking about soap and 'movie queens'! - and the use of the word 'sissy'. But the conversation is uber-masculine soldier speak: "Here's a soap with a machine gun sweep... Mows down dirt, grime and grease with effortless precision... But "taking dirt for a ride" is as far as the ride goes. For while Lux Toilet Soap acts as quickly and is as deadly to the foe, it leaves the victim's surface smooth as a movie queen's skin... Pure skin joy, that's what it is! Lather quick and plenty. And does that lather get it goes after! ... And speaking of movie queens - Lux Toilet Soap is their particular pride and joy. Practically all the stars use it to save the surface!

But it's no sissy soap - It's swell, effective, real soap - As fine as the buck-a-cake French stuff you can't afford. Try a cake... it only costs ten cents! And once you've dipped your beezer in a bucket of Lux Toilet Soap suds, you'll never let a lesser soap touch your hide." And so said Lux...

Before engaging in real Marketing the Rainbow Unilever made a stop over with gay vague (aka gay tease) commercials.

A very early campaign by Unilever using gay tease was made by OMO in 1997. A short man shows up at a karate class and everyone stops and looks at him - he's wearing a pink robe instead of the requisite white one. They all come over as if to bully him. Later we see the man in the shower next to a much larger man, and they both share a looks at each other's genitals. Predatory or shared interest? It's hard to tell. This ad (dubbed in English) is for Omo's phone support service called Careline. The spot won a Gold Euro EFFIE in 2000.

A remarkable commercial from staunchly catholic Philippines, released already 20 years ago. This is a twist on the old ad concept of a product making a woman so attractive that even a gay man will fall for her, if only momentarily. The ad is not unlike the British Impulse commercial above.

This is a 'gay vague' commercial from Latin America. An older man sits alone at home when the doorbell rings. A chubby, hairy "bear" is at the door, puts down a boombox and starts dancing absurdly - wearing only a towel. The older man watches without expression, as others in his building look on. The next shot is of "5 minutes before," when the dancing man was taking a shower at home. He is speaking to his girlfriend in Spanish about the soap he's using. AdRespect gives this ad an "Equal" rating, because it portrays this man as a likable character, and there is no negative reaction from others at his odd (if not gay-like behavior).

Dutch laundry product Robijn had openly gay magician Hans Klok (who rose to international fame due to his residency in Las Vegas with Pamela Anderson) talk about its virtues. Another commercial in this series features gay Dutch scream queen and singer Gordon:

The wordplay is lost in translation, but his nickname "Goor" means 'dirty'. Gordon was also spokesperson for another Unilever brand, together with his frenemy singer Gerard Joling: Knorr.

In faux documentary interview style, "former hairstylist Chauncey FauntLeroy" addresses the camera as he sits in a cushy chair, surrounded by flowers and art, with a tiny Yorkie in his lap, complete with hair bands. Bitterly, he says, "You know, I used to work for one of the top salons in the country. But since women can use Salon Selectives to make any hairstyle they want, well, I had to look for work elsewhere." AdRespect: "While Chauncey is clearly the picture of a stereotype, the ad also finds humor in other ways - such as the irony of being in the wrong job - and does not bring about negativity to his gayness."

An effeminate gay man speaks to explain a sweepstake, and various winners of cash prizes are shown as they receive them. The screen reads "Cream Silk Make Over Millionaire. There's one more winner of one million pesos." The ad earns AdRespect's "Equal" rating because it is inclusive of the gay man, and his demeanor is not meant as ridiculous.

Dove also celebrated diverse moms and familial structures with its campaign #RealMoms. One mom featured in this commercial, Shea, is trans. She is captured in the campaign along with the baby boy's other biological parent. “You get people who ask, ‘What do you mean you’re the mom?’” Shea says in the video, as she cares for the baby. “We’re like, ‘Yep, we’re both gonna be moms.’” Throughout the video, Shea and the other featured moms emphasize Dove’s message that “moms are redefining what it means to be a ‘good mom’” by sharing their unique paths as mothers. Other moms featured in the video include a cattle rancher, a rock climber, a stay-at-home-mom, a tech manager, and a breakdancer, all of whom share similar sentiments. “You are the only expert in your kid,” says one. “Believe in yourself. Believe in your ability as a woman.

Agency Ogilvy also made a case study for this campaign. One of the examples in this video shows two lesbian moms with positive comments. The results

* highest engagement of a Dove launch

This American commercial, however, was not received well by LGBT critics for the derogatory depiction of a gay character. Part of a $30 million marketing effort for the brand, the ad features a real-life butler and ran in prime time and daytime on network and cable, including MTV, Lifetime and Oxygen. AdRespect: "While the ad suggests a classic rivalry for attention and perfection, the humor is almost entirely based on the flamboyance of the gay florist, and at his expense. It never reaches beyond stereotype."

An ad for body spray Impulse featured a girl and three puppies, and the line "can we stroke them?" from two women to another. Oh and then there is the glimpse of a vicious queen. The ad agency, which also created an earlier gay-themed storyline for the product, says that lesbian love was not the intention of this commercial.

In the same year the male version of the brand, Dove Men+Care, celebrated the impact dads have on the world around them, because "when dads care, everyone benefits". For Father’s Day Dove championed paternity leave for dads - including two gay dads - with this emotional life style commercial.

After 2015's adorable campaign, the next year Dove Men+Care released this video on YouTube to show their support of same-sex parenting. Entitled "Caring Makes My Dad, My Hero," the commercial put a spotlight on Dove Men+Care's favorite demographic: young and invariably attractive dads.

In 2016 Dollar Shave Club was acquired by Unilever for a reported $1 billion in cash. Two years later, Gillette's "toxic masculinity" was just screaming for an answer. Dollar Shave Club rebooted their 2018 commercial "Get Ready" and let Frank Sinatra sing "I Gotta Be Me" to a great variety of men (and some women) who are shaving different parts of their bodies. No supermodels, but everyday people, including bears, nerds, drag queens, a gay couple and many others. "Whoever you are, however you Get Ready...
Welcome to the Club."