Click on pictures for larger image, or to view the video.

Snickers is a chocolate bar made by Mars, Incorporated, consisting of nougat topped with caramel and peanuts that has been enrobed in milk chocolate. More than 400 million Snickers bars are sold per year.

Mars has a Global Inclusion & Diversity Officer and a 100 percent score on the Human Rights Campaign's 2021 Corporate Equality Index.

See the main article about Mars en their other rainbow brands. 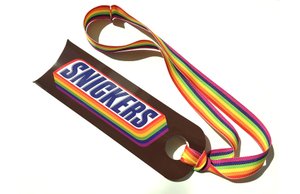 In 2017 Snickers announced that they would be giving away free, rainbow packaged samples in that year’s Gay Star News Pride bags, to support Pride. As in previous years, Gay Star News distributed 20,000 highly coveted Pride tote bags at festivals around the UK: Birmingham Pride, London, Bristol, Manchester and Brighton. Snickers also sponsored the Gay Star Support page; a new part of the website to encourage people to #BeWhoYouAre and tell stories from the LGBT community.

Michele Oliver, Mars Chocolate UK’s vice-president of marketing, said that Snickers wanted to "promote friendship" and the "support network we all give each other. We all know Snickers tells us ‘you are not yourself when you are hungry’. Now it will tell us ‘your friends will accept you whoever you are, in all your colours’."

Three alternate versions of an ad premiered during the 2007 Super Bowl, and all ads were available via the company's website. The site allowed users to vote on their "most satisfying" outcome, and this version was in second place. There was an unintended "kiss" mid-Snickers. Stunned, the two men stepped far away from each other and proceeded to do 'masculine' things to prove that the kiss meant nothing. A third mechanic (Big Al from the classic 1993 movie Blood in, blood out) steps between them, flips his hair, and asks, "Is there room for three on this love boat?" The Human Rights Campaign issued a press release insisting that Snickers pull the campaign, and the company responded by pulling the ads from their website. The ad has been panned by critics, including an article by Dan Wetzel at Yahoo! Sports and a commentary by Bob Garfield at Advertising Age."

Willem Dafoe is a cranky Marilyn Monroe in this Snickers' Super Bowl ad in the long running campaign "You're Not You When You're Hungry". If you ever wondered what Marilyn Monroe would look like when she's cranky and hungry, it isn't pretty. Snicker's clever ad for Super Bowl 50 has the quintessential blonde bombshell shooting the famous billowing-dress scene from "The Seven Year Itch." But when the camera pans up from the gusting subway grate, it's not Monroe we see, but the sinewy legs and villainous face of actor Willem Dafoe. In this series Snickers brought us legends and divas (and gay icons) like Betty White, Joan Collins, Liza Minelli and Aretha Franklin.

In 2018 we saw a male diva: Elton John. John stars as the “hungry” version of the rapper Boogie. When it becomes time for the rising star to spit his best flow in a rap battle, John appears in his place and proceeds to launch into an off-key rendition of his 1976 hit “Don’t Go Breaking My Heart.” However, one of his friends quickly stops the singer and advises him to “eat a Snickers,” explaining that “you always your edge when you’re hungry.” After biting into the sweet treat, John turns back into the rapper, who takes part in the rap battle with ease.

Things went viral in 2021 (on my channel alone it raked up close to 200K views, ranking it top 3 of all its 1,000 clips), when this theme was applied to gay Spanish influencer Aless Gibaja in "The small bar". The transformation from the flamboyant Gibaja to a boring, bearded straight guy was presented as "better".

The advert was heavily criticized after it began circulating online, with some calling for a boycott of the brand. The State Federation of Lesbians, Gays and Bisexuals was among those to condemn it, saying that it was “shameful and unfortunate that there are companies that continue to perpetuate stereotypes and promote homophobia”.

The incident came weeks after Spain was rocked by the fatal beating of a young gay man in an alleged homophobic attack. The killing of 24-year-old Samuel Luiz sparked nationwide protests.

Snickers Spain said it would immediately pull the advert and apologized “for any misunderstanding” that may have been caused by the campaign. “In this particular campaign we wanted to convey in a friendly and lighthearted way that hunger can change your character,” it said in a statement posted online. “At no time was it intended to stigmatize or offend any person or collective.”

A 'gay vague' commercial from 2006. AdRespect: "A man sits at his desk in a carpet store eating a Snickers. While he's eating, another man approaches and asks if he can help him enjoy the Snickers. He pulls out a guitar and begins singing a song about the candy bar. The first man originally seems perplexed, then begins to nod his head and sway to the music. The men exchange glances that could be interpreted as homoerotic."

Another one from the land of Oz. Two guys sit on the beach, eating a candy bar. Meanwhile, a woman walks in front of them, wiggles her butt dramatically as she sets down her towel and prepares for the beach. "That's different," one of the guys says to his mate, whose mouth is full of a bite from his candy bar. "Yeah, I think it's the nuts," he replies, referring to the hazelnuts in the Snickers bar -- then in a double entendre, the camera cuts to a front shot of the woman, who is actually a well-known Australian drag queen (Vanessa Wagner).

The two actors appeared in numerous other Snickers ads for several years around the 2001-2003 timeframe. 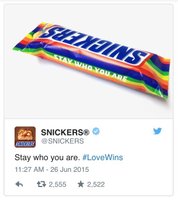 To support same-sex marriage in the US, Snickers used the slogan "Stay who you are" next to #LoveWins on their social media.

A first brush with the rainbow comes from redneck land Australia. In this 2001 video an attractive surf bum comes in from an afternoon of waves. As he walks in, he's holding his stomach and his apparent girlfriend, a svelte blonde in workout clothes, says, "Hey, what's wrong baby?" She hands him a candy bar. After his first bite looks back at her - except she suddenly appears to have a beard. With fuzzy vision, he hallucinates as she appears to transform into a man, who asks if he's okay. The surfer now stares in amazement and asks, "What the...?"

AdRespect: "The message of this ad is as hazy as the man's vision -- is he hallucinating from hunger or from a bite of the Snickers bar? Was he really with his girlfriend in the first place or his mate? The humor of the commercial is in the "horror" of seeing his girlfriend as a man.

While few would wish their romantic partner as the opposite gender, the humor could also have worked for her to be another woman -- which may have brought a smile to his face if she was sexy too -- or his mother. However the humor is "heightened" here by making it another man, thus a somewhat homophobic laugh for viewers." 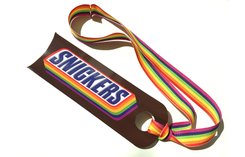 The next year brought another controversy. Mars pulled this British TV ad for Snickers featuring Mr T harassing a speed walker for being a "disgrace to the man race" after US complaints that it was offensive to gay people. They pulled the ad even though it was never shown on TV in the US - as happened around the same time with the Heinz Deli Mayo ad featuring two men kissing. In the UK the TV ad barely ruffled feathers, the Advertising Standards Authority said. The Snickers ad was one in a series of Mr T videos.