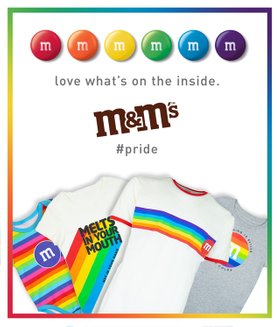 M&M's are multi-colored button-shaped chocolates, each of which has the letter "m" printed in lower case in white on one side. They are the flagship product of the confectionery division of Mars.

The original candy (est. 1941) has a chocolate filling which, upon introduction of other variations, was branded as the "plain, normal" variety. Peanut M&M's, which feature a peanut coated in milk chocolate were the first variation to be introduced (in 1954), and they remain a regular variety. Numerous other variations have been introduced, some of which are regular widespread varieties (peanut butter, almond, pretzel, crispy, dark chocolate, and caramel) while others are limited in duration or geographic availability.

They are produced in different colors, some of which have changed over the years. The candy-coated chocolate concept was inspired by a method used to allow soldiers in the Spanish Civil War (1936–1939) to carry chocolate in warm climates without it melting. The company's longest-lasting slogan (since 1949) reflects this: "Melts in your mouth, not in your hand." The company's first big customer was the U.S. Army!

Mars has a Global Inclusion & Diversity Officer and a 100 percent score on the Human Rights Campaign's 2021 Corporate Equality Index.

See the main article about Mars en their other rainbow brands, and also the one about Snickers.

With their rainbow of colors (with brown sometimes substituting purple) M&M is an ideal brand to show support to the rainbow community. And they have done so for years.

For the media event of the year (Super Bowl) M&M's released the video Come Together. The commercial proves M&M’s can make almost any situation better… except, of course, when Dan Levy eats your friends. This segment was also featured in a longer version.

For the launch of their new snack in 2010, a pretzel needed to be inserted in an orange M&M. They both seemed to be male and were having some hesitations about this process, but in the end, they were, eh... merged. A funny "bloopers reel" was released one year later.

This ad joins together the popular animation character Shrek with the male Yellow Peanut M&M and Red Chocolate M&M characters. The ad is full of double entendres about 'the size of things'. At a certain point, talk is about a magic spell. Shrek says with a devilish grin: "Well when it comes to breaking spells, usually somebody's gotta kiss somebody." The camera pans back and forth between the two M&M's, closing in on their panicked faces. Just as Yellow makes a kissing face, Red puts his hand up and exclaims: "That's not gonna happen," and walks away. AdRespect: "This ad can be seen as negative because of the disgusted reaction of the Red M&M at the thought of kissing his male friend."

In 2017, the official M&M Twitter account shared a picture of the two female characters representing green and brown M&Ms, on a beach holding hands.

In that year they also brought us gender 'neutral and same-gender' candies.

In 2018 Walmart opened Action Alley to brand-supplied Pride Month activation. In at least some stores, M&M's supplied a side panel depicting M&M's candies arranged in a rainbow alongside a "yes to sharing love" message.

M&M’s were nominated as a Top 10 Brand for LGBT+ inclusion in the UK with their campaign ‘We are all the same. Love what’s on the inside”. The images referred to were a set created by a lifestyle photographer of hundreds of M&MS® inscribed with ‘Mr&Mr’ and ‘Mrs&Mrs’ in L.O.V.E and heart shaped plastic boxes.

In 2009 began the M&M's Color Break-Up contest in Australia, where people tried to reunite the M&M's candies Red, Yellow, Ms. Green, Blue, and Orange. In this promotion all the colors were separated per bag, and anyone who found a bag with the colors united could win one of 3,000 instant prizes. There was a campaign video, and one with the classic break-up of Red and Yellow, two male M&M's who apparently were more than roommates. In another clip ("Reunion") we see Yellow longing for his red friend and finds Red's lipstick on a cup. This does not necessarily mean that Red is female, though.

The first and only "female" M&M, Ms Green, was created in the late 1990s. In this commercial, she walks down the street to many catcalls from guys she passes. She rolls her eyes and with contempt says, "Men." Then a few women turns and one says: "I'd like to get my hands on that." With equal contempt, Ms. Green says, "Women." After a whistle, she turns to yell, "Go buy yourself a bag!" The joke here is that everyone, women included, is attracted to her. It is handled in a neutral way that doesn't insult gays but may be objectionable for overweight people." 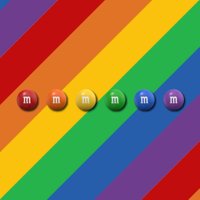 Click on pictures for larger image, or to view the video.

When Mars announced in 2022 that the M&M's would become “more nuanced personalities to underscore the importance of self-expression and power of community through storytelling”, the internet exploded in laughter.

The green M&M, for example, would be wearing sneakers from now on “to reflect her effortless confidence” and the brown M&M will wear sensible kitten heels instead of her previous high heels to show that she is sensible. The red

Mars' M&M brand has shown some interesting displays of Marketing the Rainbow, with a very early start (1999) and some clear statements of support to LGBT diversity - and other minorities. It is interesting to see how candy can be used to make such statements, and even more interesting to see how it causes controversy among the conservatives - which is always a good sign. They did withdraw of the lesbian relationship between Green en Brown a bit, but M&M scores a magnificent 9+ for their efforts.

They also changed the skin color on the characters’ arms and legs to match their candy shells instead of the white-people flesh tone in their previous design. Today.com observed: "The blink-or-you'll-miss-it design changes are kind of like looking at one of those "Can you spot the difference?" pictures." In an effort to represent all different shapes and sizes, Mars said they would also be shaking up the look of the actual candies.

All in all a bit of a surprising attempt to be 'more inclusive', while they already had done so much to show their diversity.

Early 2023, conservative media attacked M&Ms after they released candy packages with only female characters, Green, Brown, and the new Purple - described by some media as "a woke female-only special edition". The latter was 'oversized' to celebrate body positivity (which is a bit ironic for a candy brand). The limited edition package shows the three female characters upside down (so the M becomes a W for “woman”) with the message “Supporting women flipping the status quo.”

A tweet from 2015 of the Green and Brown (previously both characterized as female) holding hands on the beach went viral. The caption says: “It’s rare Ms. Brown and I get to spend time together without some colorful characters barging in. – Ms. Green”. The implication was that the characters were lesbians. Mars said their relationship is based on the two 'together throwing shine and not shade'. In 2021 it was suggested by a blogger that the green and brown M&Ms were "two beautiful and happy trans women lesbians".

In 2022 M&Ms introduced their first new character in a decade: Purple.  The character's "charm and quirky nature" come from her "keen self-awareness, authenticity, and confidence," Mars said.

The character, voiced by comedian and talk show host Amber Ruffin, was introduced in this rather awkward YouTube video for her new song, ‘I’m just Gonna Be Me’.

For every stream, M&Ms donated $1 (up to $500,000) to Sing for Hope, a non-profit worldwide organization that harnesses the power of the arts to create a better world. 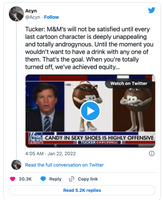 M&M will be less bossy and the orange M&M will “acknowledge his anxiety.” One pundit said: “finally an M&M with mental health struggles.”

Fox bigot Tucker Carlson freaked out when M&Ms announced that Green and Brown would be wearing more sensible shoes, saying that the “less sexy” footwear made the candy “deeply unappealing and totally androgynous.”

“Women all over the world are flipping how they define success and happiness while challenging the status quo, so we’re thrilled to be able to recognize and celebrate them,” said Mars Wrigley North America chief marketing officer Gabrielle Wesley. M&Ms donated $1 for every purchase up to $500,000 to She Is The Music and We Are Moving the Needle, two nonprofit organizations supporting women in the recording industry, as well as $300,000 to other nonprofit organizations.

“This is the kind of thing that makes China say like, ‘Oh good, keep focusing on that, keep focusing on giving people their own color M&Ms, while we take over all of the mineral deposits in the entire world,” said Fox co-host Martha MacCallum on Outnumbered. A text on the screen also noted that Green and Brown held hands in an ad - a picture from 2015, by the way. And should we be worried about China, because of some candies...?