Amstel is a Dutch brewery founded in 1870 in Amsterdam. It was taken over by Heineken International in 1968. The brewery was named after the Amstel River, that gives Amsterdam it's name. Originally, Amstel beers were mostly consumed in Amsterdam. The expansion outside the city ran more or less parallel to the development of the Dutch railway network. Agents were appointed in towns along new railway lines. As from 1883, Amstel beers were also exported to Great Britain and the Dutch East Indies. In 1926, Amstel consisted of a third of the Dutch beer exports. In the 1950s they were the first Dutch brewery to export beer in cans.

Heineken offers several beers under the Amstel brand. Amstel Lager uses predominantly light pilsner malt, sold in 75 countries. Amstel Light is a 3.5% Alcohol by Volume (ABV) pale lager sold in the USA and The Netherlands. In France a beer called Amstel Free, with minimal alcohol content is produced. A non-alcoholic beer, Amstel Zero, can be purchased in the Netherlands, Greece, Egypt and few other countries. Amstel Ultra Light is a beer made by Heineken Mexico for the Mexican market.

Since 1968, Amstel grew 10 times its volume worldwide, and has become the third largest brand in Europe. It is the fifth most international beer brand in the world.

Amstel Light was positioned as Heineken's light beer in the US. In 2001 they ran this 'bisexual" ad. "At Amstel Light, we believe in having the best of both worlds... especially when it comes to beer." This commercial is rare in its straightforward and non-judgmental approach to bisexuality. Of course, it also appeals to straight males' lesbian fantasies.

In the time when the restrictive policies of President Bolsinaro started being felt, a number of sponsors withdrew from Sao Paolo Pride, the biggest one in the world. This is when Amstel stepped in, presenting the "Amsterdam freedom spirit", becoming the official beer of the Pride Parade in São Paulo. Some 3 million spectators showed up (78% more than 2 years before). The box of goodies got its unboxing video, and a case study was made about the campaign.

The designs were made by creative strategist Pedro Capellão and Hands.Ag Agency.

In 2021 the Amstel team in Brazil produced a remarkable video in collaboration with 7 influencers, with the theme "I am what I am": *Pabllo Vittar * Mateus Carrilho * Marcela McGowan * Heey Cat * Pepita * Bielo Pereira * Raphael Dumaresq.

It was not just a social media campaign, but the commercial was repeatedly shown on national television. The remarkable thing is the homophobia in Brazil is rampant, encouraged by the president (whose name shall henceforth remain unmentioned). The video quickly garnered over 8 million views with a 2:1 like:dislike ratio.

A subset of clips was made for social media. 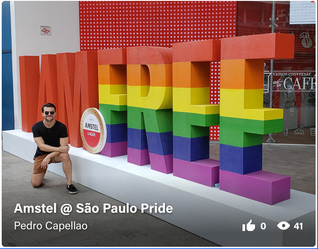 In the same year, they ran a commercial in the Netherlands, called "Is it a man?". The three buddies (Friends Forever), who often played a role in Amstel commercials, want to know the gender of a blond lady at the end of the bar, and try to find out with a soccer question. From a Dutch company like Heineken, you would expect some more respect for both women and transgenders or transvestites (it is not clear in this video what we are dealing with). This Amstel commercial fails, supposedly it is fun. 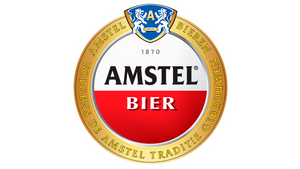 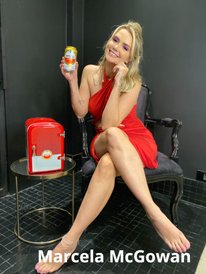 As a separate brand under the Heineken group, Amstel follows its own course with its own branding. (see article about Heineken). Their present brand strategy says: “As a brand founded on friendship and born in Amsterdam over 150 years ago, Amstel has always cherished differences and encouraged openness between people. And today is no different, as we continue to stand with communities we serve to ensure everyone is made to feel welcome. Inclusion & Diversity is something that Amstel takes pride in, through developing campaigns around the world that encourage togetherness and openness between all people, no matter who they are, and actions to help people share true connections just like our founders. At Amstel, we believe that we, alongside other global brands, share a responsibility to take a stand on social issues like Inclusion & Diversity and make a positive difference. To continue making progress on this journey for the various communities we support, we will continue to create campaigns and activations that seek to amplify their voices, eradicate prejudice and intolerance, both on a local and global level.”

Although some global commercials were run touching upon "Marketing the Rainbow", most activity was seen in Brazil in recent years.

A remarkable clip for the 2018 carnival in Brazil, where Amstel suggested to drink water... Between the revellers we also - briefly - see some gay guys. The video from 2017 showed a man in drag. But then again - it's the carnival...

Amstel was introduced in Brazil in 2013 to strengthen the portfolio of Heineken. According to Daniela Cachich, Director of Premium Brands Heineken Brazil, Amstel is strategic for the company: "Success in countries such as Holland, USA and Greece, Brazil, Amstel will be a choice of beer for our customers and consumers seeking the taste and quality of the products Heineken. Lovers of the brand create trends, are unconcerned with the standard, prefer new influence attitudes and always innovate".

The beer is presented as "European recipe, Born in Amsterdam".

For the carnival, a number of videos were made. Two that deserve attention in this respect are

Mozão de Carnaval (Carnival Crush) which shows a girl on girl kiss, and Casa Comigo? (Marry me?) where a guy proposes to a guy.

As sponsor of Conmebol Libertadores (a.k.a. the Copa Libertadores de América, the highest level of competition in South American club football), Amstel presented an initiative to break down barriers and prejudices in football that will challenge your convictions. The video "Accurate kick", created by HNK Lab, shows a social experiment with fans in love with their teams, and announces its support for JogaMiga and Ligay, two projects that promote the inclusion of women and LGBT+ people in the most popular sport in the world.

The collaboration with the influencers was continued, for instance for Bisexuality Day (September 23), where Marcela McGowan gives some tips.

On Instagram there were quite a few relevant posts as well. 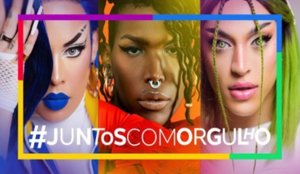 Mid 2021, Amstel announced it would partner with the “Made with Pride” movement launched by Facebook for Pride Month. The initiative involved making advertising space available to increase the visibility of 200 small LGBT+ owned businesses. The project was developed together with the Aliança Nacional LGBTI+ and the Micro Rainbow International Foundation. Entrepreneurs could register to participate via a special website.

A sequel to this campaign was I am Gil, with a former Big Brother Brazil contestant. "Gil has done everything in his life. Everything, from waiter to betrothed to a woman. Today he is who he always wanted to be. Do you want to dive even deeper into this and other stories of Gil's pride?" A special section on the website was dedicated to his story.

Since Amstel committed to attaching the values Inclusion & Diversity to their brand, they have made a big (international) splash with relevant and beautiful content, including collaborations with LGBT charities. So far most of these campaigns are limited to Brazil and Ecuador. 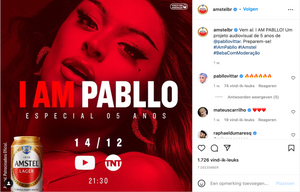 Late 2021 superstar Pabllo Vittar launched an official live performance of his hit "Flash Pose". The original video was quickly viewed almost 30 million times. Vittar is a Brazilian drag queen, singer and songwriter. Pabllo has won numerous awards. His music is considered as "unofficial anthems for Brazil's LGBT community" and he is widely viewed as a voice for them. In this performance, Amstel's name appears a lot of the time. 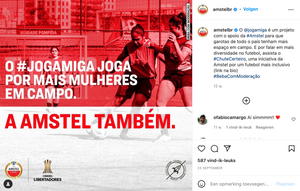 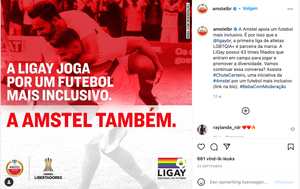 The action aims to stimulate debate, through the fans' real stories, and support programs that go against the stereotypes that still exist. “Respect and diversity are two of Amstel's main pillars, that's why we always seek to bring relevant discussions that can contribute to society. We want to create more and more dialogue on this topic and support initiatives that have the same purpose as us: to show that the passion for football unites people, and this should be an inclusive environment where everyone feels respected”, says Vanessa Brandão, director of the Heineken Group's mainstream brands marketing in Brazil.

This project is reminiscent of Heineken's "Worlds Apart" from 2017.

They also introduced a Round Table, connected with Chute Certeiro, which brings together diverse people passionate about football to discuss diversity and inclusion in the most popular sport in the world, through their stories.

The chat, which is available on the 90 minutes social networks and on the brand's channels, was presented by Carter Batista, passionate about football and brand ambassador for 4 years, with the participation of the Captains of the Conquest of America Amstel from 90 minutes, Bianca Goes, Marcinho Black and Belle Suárez, and also with the presence of Josué Machado, president of Ligay, and Nayara Perone of JogaMiga, both members of projects supported by Amstel and that for years have promoted the initiation and inclusion of women and LGBTQIA+ people at Soccer.

The main objective of the conversation was to discuss the prejudices and stereotypes that exist around the most famous sport in Brazil. The roundtable is an offshoot of the Chute Certeiro initiative, launched by the brand in recent weeks, and is part of Amstel's #JuntosPelaPaixão campaign for the 2021 edition of Conmebol Libertadores.

The participation in this event was successful, also in numbers. The increasing popularity of Pride gave Sao Paolo an economic impulse of €70 million! As to brand impact for Amstel: the affinity grew from 44% to 49%, spontaneous awareness increased 2 percent point and communication awareness 7 p.p.

Featuring the home base of the brand, Amsterdam, a giant Jeff Bridges tells us about the importance of bridges. In one scene we see two kissing girls. On a bridge, of course.

For the launch of Amstel beer in Ecuador (‘La Cerveza Mas Que Bienvenida’ - The More Than Welcome Beer), this video was made. It displays an explosion of all kinds of diversity in terms of gender, age, origin, sexual orientation, size, (dis)ability.

The next year they ran a Pride campaign on IG Stories with the same theme: "At Amstel being inclusive is not just for one day, that's why we celebrate #PrideDay with these posts to put each of them into practice."

The plan is to make it even bigger and more impactful in 2022 in order to change the reality of members of the community, by enabling their financial empowerment.

Ecuador, The More Than Welcome Beer, 2020

For the campaign Amstel was awarded with 2 Lux Awards, one of the most prestigious Ecuadorian awards. They won Gold in Communications & Strategies and Silver in Craft & Art.

For Ecuadorian standards, and particularly in the local beer industry, no brand had such a focus on I&D in the past.

The campaign sentiment was dominantly positive and Amstel Ecuador closed the first full year at 28% above target.