“Gay men and real estate are a dream marketing match.” *

Answer: Had you bought property in any of those places, at precisely those times, you would, within a short space of time, have multiplied your money 2, 3 or even 4 times, irrespective of the whims of the national property market. You would have bought a property just before the area became fashionable with the gay community, who seem to have a singular knack of identifying up-and-coming locations, bringing with it gentrification, trendy bars and nightclubs; then, hot on their heels (pun intended) come the young, fashionable straights, attracted by the chic boutiques and fancy bistros and, voilà, you have a local property boom. 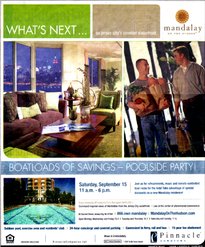 With double income, no kids (dink) households in abundance, the gay male property market has long attracted the interest of mainstream realtors and property developers. But many still struggle with how to understand the consumer needs of gay men when it comes to designing and marketing real estate to the gay market segment.

Many realtors in the Netherlands have advertised (upscale) property in gay media. However, when asked about the underlying strategy, almost all of them sheepishly denied the existence of such, and indicated that the channel was chosen by their client. Either they were ashamed of targeting gays as potential customers, or they really had no idea what they were doing.

“Celebrity gay" Josh Rafter (of Big Brother fame) is director of Outlêt, Britain's biggest gay property management and lettings agency. "We tend to get wind of up-and-coming gay areas when gay landlords contact us, seeking tenants," he says. "In London, New Cross is suddenly becoming fashionable because the gay community seems to be moving on from Hoxton, Hackney and Kensal Rise." The big gay tribal movement, continued.

A widely accepted view is that gay men have historically invested in property in unpromising postcodes and have helped make these areas desirable to all: examples include Soho, Earls Court, Hoxton and Vauxhall in London, Greenwich Village and Hell’s Kitchen in New York, Eixample (nicknamed Gayxample) in Barcelona and Surry Hills in Sydney. These areas have a number of nicknames, gayborhoods being among the most friendly ones.

In the Netherlands, gayborhoods have long ceased to exist (if they ever did), as society is more or less fully integrated, and also lacks a Chinatown or Little Italy. You can find a higher percentage of gays living in more upscale buildings or areas, but the neighborhoods as such will not color in rainbows.

One reason why gay people are able to move in on an area fairly quickly is that they do not have to worry about facilities such as good schools and parks and playgrounds: a lack of children (in 90-95% of the cases) makes gay couples generally more mobile.

"And because of the dual income and no children, gay people can often afford to do up their homes really well, which inspires the neighbours and, before you know it, the whole street looks better."

Tris Reid-Smith, editor of the Pink Paper, says there is a class of gay men who could justifiably be termed early adopters, because of a combination of independence of mind, disposable income, interest in fashion and an artistic leaning. "In Manchester, for example, the arrival of the gay community sparked off the conversion of loft apartments which spawned a whole new strand of interior design," he says.

"You then get what has been termed 'fauxmosexuals' - straight people who are admirers of the gay lifestyle – moving in to take advantage of the nightlife."

However, James Soane, who, with his partner Christopher Ash, runs the Project Orange practice (Chartered Architect and Interior Design Studio), warns against over-simplification. He points to the meat-packing district of New York which has been transformed from a very downtrodden area to one with a vibrant community of young, talented people. "You could just as easily categorise the types of people who first moved into that district by what they do - artists, designers and the like - as by their sexuality," he says. He adds that you cannot deny that the purchasing power of a certain tranche of the gay community has been instrumental in helping with the regeneration of some urban areas.

Another common perception is that gays are more design-conscious and urban-dwelling, caring more about architectural excellence or the potential of a plot than the performance of the local schools. But that is not necessarily so, says Justin Lloyd, managing director of Brighton-based 4 Sale Estate Agents, which was set up as a gay-owned company aiming to serve homosexuals in the late 1990s. “When people think of the stereotypical gay apartment they think of a fashionable two-bedroom unit with fabulous entertaining space and the latest gadgets,” says Lloyd. “But the gay market is extremely diverse. We have buyers looking for everything from a one-bedroom bolthole to a seafront stucco mansion.

There is no question that gay buyers have tended to lead the general apartment-buying population when it comes to moving to former run-down city centres. The fashion for city-centre living in Manchester was preceded by the colonisation of the Canal Street area by the city's homosexuals. In 1995, the average flat in the postcode district M1, which includes the "gay village", was £58,000. Twenty years later it is £160,000.

Another veteran of the market, Barry Manners, co-founder of Chard Estate Agents, in business since 1993 in the Earl’s Court and Kensington areas of London, describes seeing a radical shift over the past 20 years. In the late 1980s and early 1990s, mainstream property professionals were not always giving great service to the gay community. As a result, specialist agents, builders, interior design outfits and financial services groups emerged . But today “the gay village is all but over,” says Manners. “It was a 1980s/1990s thing. Now clients are much more interested in where the local supermarket is than whether there is a hot leather bar nearby. We really don’t need estate agents that specifically serve the gay community now.”

However, there is one large sector of the gay market that tends to be overlooked by some property professionals: lesbians. This might be partly due to the belief that lesbians earn less than gay men (though Out Now’s research reveals their incomes are still higher than the average) and are more likely to be raising children.

Experts say this amounts to a massive missed opportunity and they believe the next step in the evolution of the market must be the proper understanding and subsequent targeting of this overlooked group of gay consumers. “The industry really needs to learn how to better understand and market to lesbian women. Failing to do that cuts the profit potential of the gay property market almost in half.”

Finally, there is the demographic of seniors. The position of the gay senior has not received much attention until a decade ago. It is directly affected by the general taboo of seniors & sexuality. The vast majority of LGBT has had a coming out, in varying degrees of trauma and stress. Many of them have enjoyed a relatively carefree life, living as an openly gay, lesbian, bisexual or transgender person.

However, by the time they need to go to a retirement home, either a senior citizen compound or a full care facility, their environment changes into a ‘micro society’, where they cannot simply choose their neighbors. Chances are that their new ‘friends’ are not so open-minded about LGBT issues, and many gays are forced back into the closet, as illustrated by the CNN case from 2010, below.

Retirement homes catering for the ageing gay population suddenly started springing up across Europe too early this century, as the first openly gay generation grew greyer and contemplated retirement.

* Financial Times, reporting on the UK gay market research study by Out Now and Millivres, 2008. 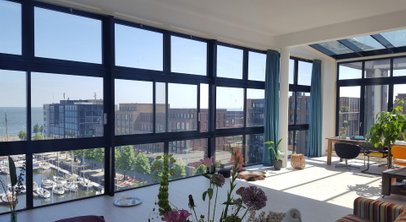